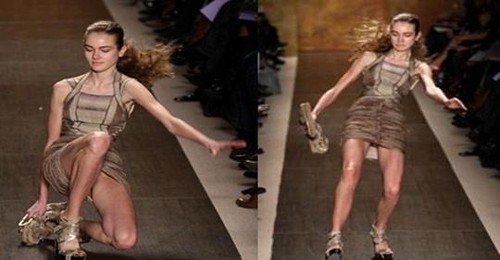 Walking along the catwalk with sky-high heels does not always go quite to plan. I mean, me walking on sneakers can be a challenge itself. Not that I couldn’t rock these heels, or I am afraid of embarrassment, but I am not interested in having a cast on my leg or hand, or even brain damage. Nuff said! But being a model will have you faced with many challenges. If it was only for the heels, but runways, outfits, accessories can spell out a disaster too. For God’s sake, couldn’t they make any slippery runways, as if their outfit is not problematic enough? The embarrassing fails include tripping over their own feet, keeling over on their ankle and slipping and landing in a sitting up position..

Slipping, tripping over your own feet, keeling over on the ankle or landing in a sitting up position isn’t funny. Well, let’s admit it is (I even laugh with myself), but falling with these can-reach-sky-high-heels on, can lead to injuries, embarrassment and being a source of memes.

Let us provide you with some of the biggest fashion runway fa(i)lls:

1. The protagonists of these falls are not only models. During Charleston Fashion Week in 2008, the fashion designer and boutique owner K. Morgan came out to take a final bow and greet the audience.

She was not present during rehearsal, so she did not know the center of the stage was not made for walking on (What on earth?). Not knowing this, K. Morgan walked through that ‘devil’s trap,’ and you know…

(See the man on the very right. He just couldn’t stop clapping.)

2. Falling is something almost every human being, let alone model has done in his or her life/career. That’s what happened to model Priscila Perez in Madrid. She’s killing it, I know. But you can see the first hints of a wobble as she turns around.

But then her heels ‘kill’ her. Ouch! Her ankles couldn’t take it anymore.

3. In an episode of ‘America’s Next Top Model’ of Tyra Banks’, falling once for Alexandra Underwood was not enough.

That gong is savage AF! Ladies and gentlemen, this is a hell of a knockout.

4. The seventh season of America’s Next Top Model got us surprised with a wobbly wooden plank floating on water.

Is this supposed to be a challenging game for models or a fashion runway?

5. The next queen of falling is the Polish model, Monika Jagaciak, during Mercedes-Benz Fashion Week of 2009. 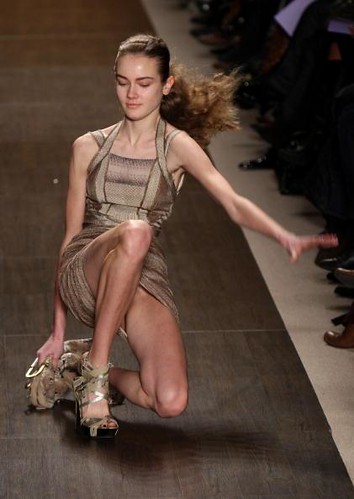 I have to say she handled this situation perfectly. 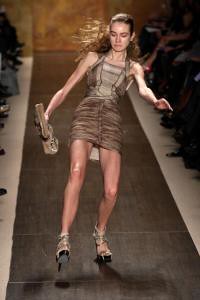 6. During a live TV fashion show held in Germany in April 2017, unaware of what will happen next, a model wearing a pink outfit walked down the runway.

And then boom! Oh boy, is that necessary to wear such high heels? Nothing couldn’t stop her, tho’.

7. This model during the Serebrova Fall/Winter 2016-2017 fashion started wobbling at first, before finally giving up

This is so me. Let’s show those heels who’s the boss.

8. At the Indiana Black Expo in 2012, while walking down the runway, this model fell completely fell off the stage.

I love her confidence. If only the final part would not happen. The video ended up as an episode of Tosh.0.

9. In an episode of America’s Next Top Model, as part of a challenge, models had to walk in an inflated bubble

How could anyone not look funny in this?

10. During a Max Factor fashion show in 2008, Carmen Electra slipped and fell after turning to blow a kiss to the audience.

Sometimes a kiss can cost so much!